Although martinis were traditionally made with dry gin, vodka martini cocktails have grown in popularity in past years. In fact, many bartenders assume patrons who ask for a martini are referring to the vodka version rather than gin. If you're a patron, it's best to specify which you prefer, and if you're a bartender, it's best to ask if the patron is ordering a gin or a vodka martini.

How to Make Vodka Martini Cocktails

The two ingredients in a vodka martini are vodka and vermouth. You can use a tutorial to make a perfect vodka martini. However, the proportions of vodka to vermouth vary depending on preference, and the ingredients can be either stirred or shaken, although stirring is the traditional method when mixing drinks made of pure spirits such as a martini. Ultimately, the cocktail is served straight up in a martini glass. Ideally, the martini glass should be chilled beforehand, but many bartenders add ice water to the glass while they are concocting the drink for a quick chill.

The traditional garnish for a vodka martini cocktail is an unstuffed Spanish olive. Often, several are speared on a toothpick that is balanced on top of the glass or inserted in the drink. Other garnishes include:

Since vodka is, without a doubt, the star of this cocktail, it is worth investing in a quality vodka for superior taste. Many taste tests have been conducted to determine the best vodkas on the market, but personal opinions vary greatly. Vodka is distilled from certain types of plants, including potatoes, corn, rye and wheat. It is produced in many countries, most famously Russia, but also Poland, Sweden, Finland and the United States. Prices vary greatly depending on the quality as well as product packaging and marketing. In recent years, "premium vodkas" have become a large share of the market. So, do you always get what you pay for in a vodka?

According to an unscientific study conducted by Slate, the relatively affordable Chopin vodka from Poland was voted the best, while well known vodkas like Grey Goose and Ketel One fell farther down the list. However, in a survey by BusinessWeek, testers preferred Ketel One, although many faithful drinkers had trouble identifying it in a blind taste test, raising the question of how much vodka brands really differ from one another, cost aside. The very affordable Smirnoff even ranked higher than Grey Goose.

The bottom line: sample different vodkas and find one that you like within your budget. Don't be swayed by sculptural bottles, sexy advertising and artfully designed labels.

The Question of Vermouth

Dry vermouth has a peculiar flavor to some. It is a fortified wine with an herby, medicinal taste. In a traditional gin martini, the vermouth was added to take the edge off. However, with vodka's more subtle flavor, this isn't as necessary. While some people prefer to add one part vermouth to three or four parts of vodka, others prefer to swish a little vermouth in the glass and pour it out before adding the chilled vodka, resulting in a drier martini. 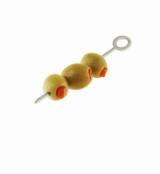 Many martini lovers debate about whether the cocktail should be made shaken or stirred. Some argue that shaking the ingredients overly dilutes them and reduces the quality of the liquor. The result is also a cloudier cocktail. However, this method is often faster, and the vast majority of bartenders shake vodka martinis. James Bond famously ordered his vesper martini "shaken, not stirred."

Stirring a cocktail gives you more control, preventing dilution. Advocates of this method suggest storing the liquors at room temperature, adding ice and a small amount of water. It delicately blends the drink, allowing the spirits to maintain their flavors, proponents claim. The stirred version is often more potent.

Most famous martini drinkers preferred theirs with gin, but here are a view vodka martini cocktail fans:

Besides vodka and vermouth, there are several ways to "shake up" the traditional vodka martini. Some variations include:

No matter how you prefer to have your vodka martini mixed, there's no doubt that using vodka creates a martini that rivals its gin predecessor.