Many people enjoy whiskey cocktails. There are many styles of whiskey (or whisky if you're in Scotland or Canada), and each adds its own unique taste to mixed drinks. Whiskey blends well with many mixers so a number of popular cocktails are made with whiskey.

A sour is one of the oldest types of cocktails that contains equal parts sweet and sour with two parts of a strong (in this case, whiskey). With sweet and sour notes, a whisky sour is a lovely balance between the whiskey, lemon juice, and sugar syrup. Whiskey sours have been around since the late 1800s, and people enjoy the balance of sweet and sour with strong whiskey. Use any whiskey you choose here, but it's nice with rye and with a smooth Canadian whisky.

Created in New Orleans, the Sazerac has a nice sweet flavor balanced by bitters, lemon, simple syrup, and herbal liqueur. All the different flavors create a lovely balance and a nice sweetness. People enjoy the combination of herbal and citrus flavors with warm rye or bourbon. 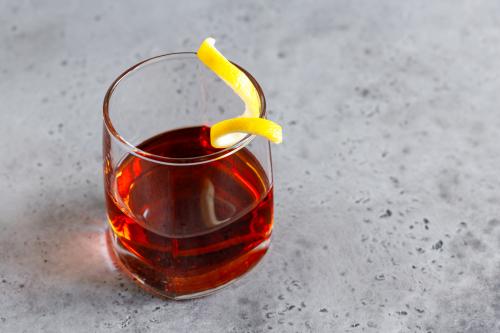 Irish coffee is a great hot drink that is particularly popular on cold winter days. Brown sugar syrup and unsweetened heavy cream blended with coffee and Irish whiskey give the drink a taste like warmed Irish cream liqueur with coffee. 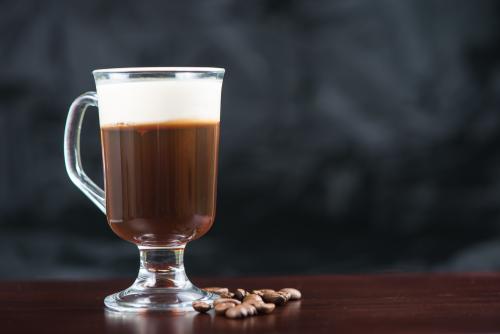 The Tom and Jerry is another hot whiskey drink that tastes like creamy, warm, boozy eggnog. Its creamy sweet flavors make it a very popular cocktail, especially in the winter. You can make your own Tom and Jerry batter, or buy a pre-made mix at the store. 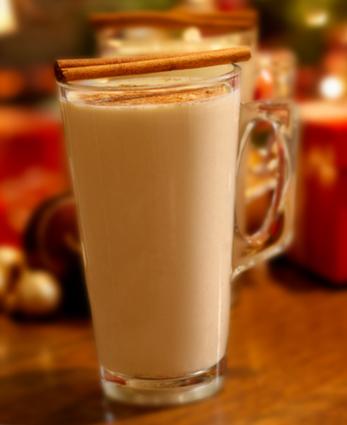 The old fashioned cocktail has sugar, a splash of water, bitters, and whiskey with a twist of orange and a cherry for garnish. Typically, a strong whiskey such as bourbon, Tennessee whiskey, or rye works very well in an old fashioned cocktail. The sweetness of the sugar cube blends beautifully with the bourbon, while the hint of orange in the garnish draws out citrus notes in the whiskey. People really enjoy the balance of flavors in this drink, which was popular in the 60s and has never gone out of style. 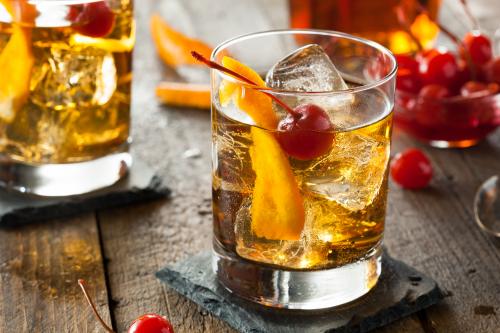 Manhattan cocktails have gained a reputation for sophistication, so many people enjoy drinking them because they have the same cachet as a martini. Manhattans are lightly sweet from the sweet Vermouth, with the warming taste of good whiskey and a dash of bitters. Rye whiskey is a traditional choice for a Manhattan, but you can also try bourbon or Canadian whisky. 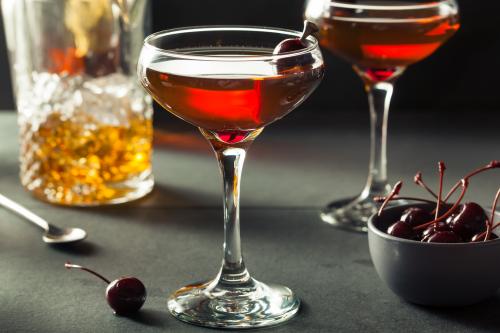 A bartender at the Waldorf Astoria created the Rob Roy, which includes Scotch whisky, back in the 1890s. Since then, the drink has retained its popularity because of its warming properties and its dry flavors. If you like Scotch, you'll love the Rob Roy. 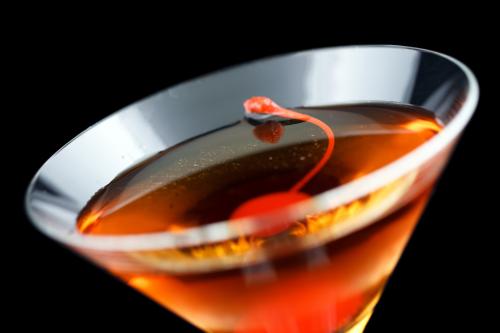 This is a light, refreshing American whiskey drink that owes its fizzy lightness to the addition of 7-Up (although you can use any other lemon-lime beverage you wish). The name, Seven and Seven, refers to 7-Up and Seagram's 7 Crown Whiskey (although you can also use any smooth Canadian whisky), which are its only two ingredients. The light refreshing nature of the drink, as well as how easy it is to make, allows the Seven and Seven to remain a popular cocktail. 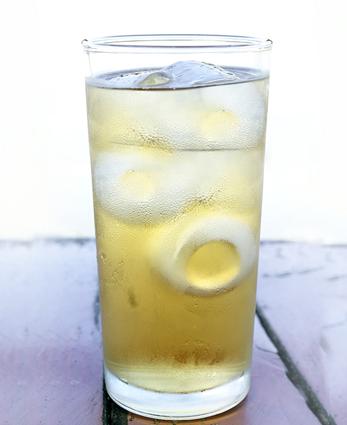 The rusty nail is most commonly made with a blended Scotch whisky; however, you may use a single malt Scotch if you prefer. Drambuie is a flavored Scotch-based liquor, so experiment with using more or less to vary your rusty nail to have the perfect mix. 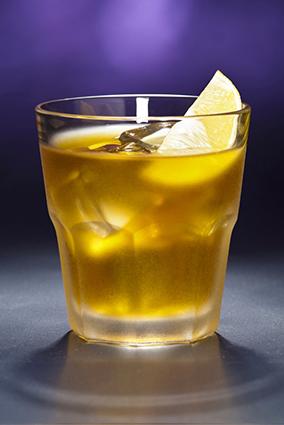 Mint juleps are sweet with a strong mint flavor. They intended to include bourbon, which adds a strong flavor that blends well with the sweetness and mint. Mint Juleps are particularly popular in the South, and they are a common drink served at the Kentucky Derby. 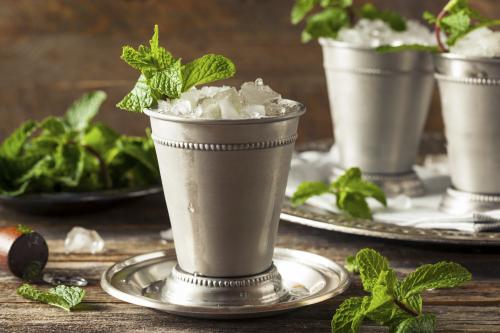 If you love Scotch whisky but sometimes like it a little more diluted, then the classic Scotch and soda is for you! This works best with a blended Scotch whisky. 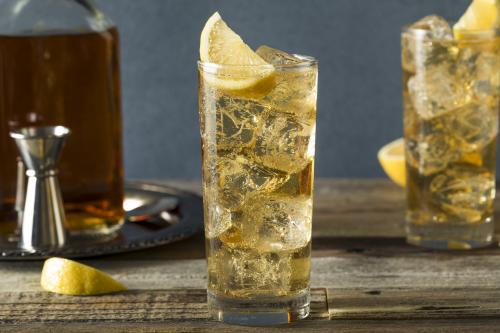 Nothing will warm you up quite like a hot toddy. This centuries-old winter warmer made its way to the United States from the British colonies, and it remains a popular hot cocktail today. Use any type of whiskey you like, but blended Scotch whisky, rye, and bourbon are all especially tasty choices. 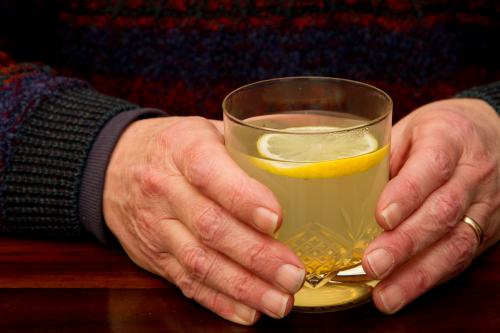 There are three main types of Collins drinks - John, Tom, and vodka. All are in a category of a cocktail known as a fizz, which is a basic sour cocktail with a fizzy element added. While vodka Collins is relatively easy to figure out which spirit it contains, the John Collins contains American whiskey (rye or bourbon) while the Tom Collins contains gin. Otherwise, the recipe for all three is the same. Only the spirit they contain is different. 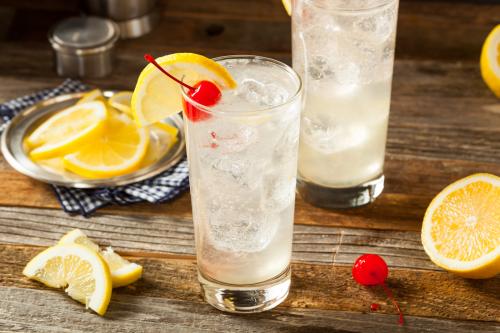 This cocktail is named after the poet, Robert Burns. It's a simple stirred cocktail - no shaker necessary. 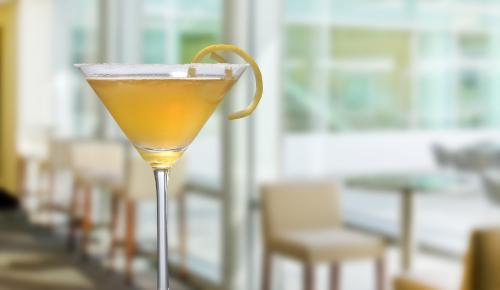 The Brown Derby came into being during the glamor of 1930s Hollywood. It was created at the Vendôme Club and because it contains America's native whiskey, bourbon, it's as American as its origins. 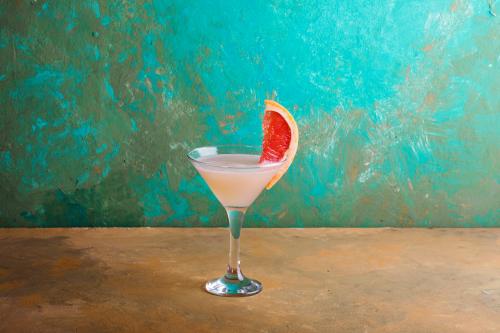 Can't decide which type of whiskey you're in the mood for? The Four Horsemen cocktail has you covered with a mix of Scotch whisky, bourbon, and Tennessee whiskey. 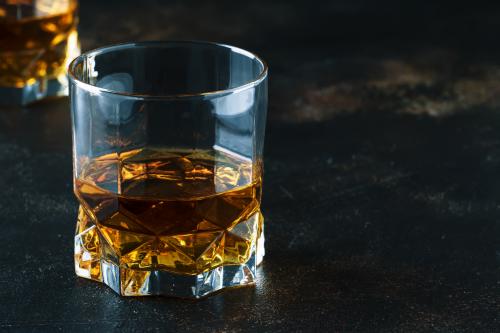 Whiskey is present in a number of mixed drinks.

These are just a few of the very many whiskey cocktails you can make. With the warm and complex flavor profile of whiskey, combining it with the right mixers creates delicious drinks for all seasons.