The traditional cocktail made with ginger beer and rum is called a Dark 'n Stormy. As most rum drinks are, the Dark 'n Stormy and other rum and ginger beer cocktails are tropical drinks that evoke the flavors of the Caribbean.

So the story goes, combining ginger beer and rum in a cocktail first occurred in Bermuda right after World War I. It was meant to mimic the appearance of a storm blowing in off the sea. The official name for the cocktail, which is frequently referred to as Bermuda's national drink, was Dark 'n Stormy. It has since been trademarked by Gosling Brothers Limited. To be legally called Dark 'n Stormy, the ingredients must include Gosling's Black Seal Rum, and the proportions and directions in the recipe must be precisely followed. However, you can make a similar version without the trademark - the Dark and Stormy.

This is a simple and quick variation on the original mojito recipe. 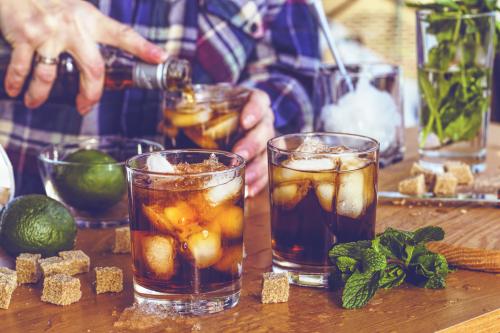 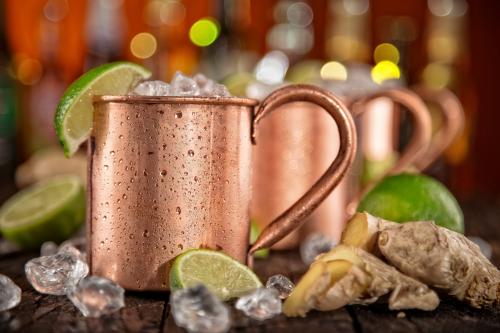 The flavor of dark rum is the perfect complement to peaches in this tasty cocktail. 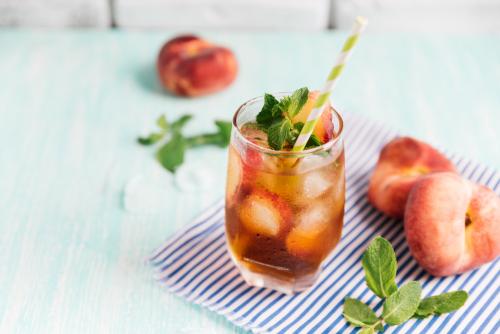 Mixers for Rum and Ginger Beer

Want to make variations on the Dark and Stormy? Then try adding ¾ to 1 ounce of the following mixers:

Mix Your Own Ginger Beer and Rum Cocktails

If the taste of ginger beer mixed with rum sounds intriguing, instead of following a prescribed recipe, just fill a tall glass to the brim with ice and pour in a shot or two of rum. Serve a bottle of ginger beer on the side and add it to the rum and ice at your discretion until you discover the perfect balance for your palate. Instead of feeling dark or stormy, you may well end up feeling closer to light and sunny.